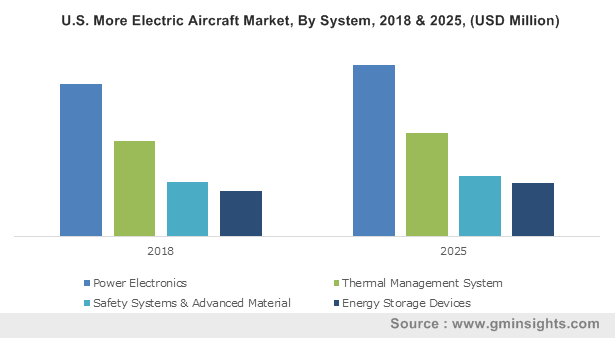 Over the past several years, airplane OEMs and parts suppliers have collaborated to develop and integrate numerous electrical components, from flight control and power distribution solutions to air pressurization and conditioning systems. MEA industry has witnessed continuous investments being directed towards research and development efforts, ensuring the most advanced aircraft parts are made available for new planes being assembled. Adopting electrical systems allows for minimizing movable parts in a carrier and improve its reliability, while trimming down life cycle costs.

The International Civil Aviation Organization had set a goal of becoming carbon neutral by the year 2020, going on to reduce carbon emissions by 50% in 2050 as compared to 2005 statistics. Undoubtedly, more electric aircraft market size will observe a tremendous rise the years to come due to the product’s vital role in alleviating global warming concerns.

For instance, Boeing alone had bagged a total of 893 orders worth US$143.7 billion in December 2018, implying the continuous expansion of the aerospace sector and the vast potential existing for more electric aircraft market. Apparently, a surge in defense expenditure by developed as well as emerging economies has also influenced the demand for new aircrafts, representing a critical application area for implementing novel MEA systems.

Another key player in more electric aircraft industry, Honeywell Aerospace, has developed an electric power distribution system for accurately managing and protecting electrical loads in an airplane. It enhances the safety, fuel efficiency and reliability of the aircrafts, along with cutting operational expenses. Separately in the defense sector, Lockheed Martin has demonstrated the potential of MEA through its F-35 Lightning fighter, which is rapidly gaining traction amongst military agencies worldwide.

Get a Sample Copy of this Report:@ https://www.gminsights.com/request-sample/detail/3357

Increasing the power of electrical systems in aircrafts is the main driver boosting more electric aircraft market size, indicating that tomorrow’s planes will have a much lesser environmental footprint and would be simpler to maintain. The industry is poised to accrue significant revenues from manufacturers looking for advanced power generation and distributions systems as well as fuel-saving technologies for cabin pressurization and air conditioning. Reports estimate that more electric aircraft industry size would exceed a global valuation of over US$45 billion by 2025.