How will the penetration of 5G technology stimulate Intent-based networking (IBN) market outlook?

​The increasing demand for commercialization of the next-generation 5G technology will propel Intent-based networking (IBN) market size. Given the extreme data speeds of the 5G technology, the commercialization will enable the service providers to launch several customized virtual private networks (VPNs) targeted toward specific applications and customers.

Additionally, intent-based networking technology allows the enterprises to have software defined control over many aspects of the network including the segmentation, content filtering, Quality of Service (QoS) and malware detection. This AI-based smart technology also allows enterprises to automate the configuration of these network devices according to the changing business objectives.

How will networking hardware segment perform during the forecast period?

Networking hardware segment is expected to grow at a CAGR of over 30% during the forecast timeframe . Networking solution providers foresee expansion of their support for 5G technology owing to the increase in data-centric applications. This will create immense demand for networking components such as routers and switches. Rapidly changing business requirements in accordance with technology change is slated to drive IBN market share from networking hardware segment.

Get a Sample Copy of this Report:@ https://www.gminsights.com/request-sample/detail/2758

The cloud deployment model is anticipated to achieve a steady growth rate of more than 32% over 2019-2025. The growth is mainly attributed to the growing adoption of cloud computing services across the enterprises. Network solution providers have been looking forward to developing cloud data center supporting IBN solutions that will accelerate the demand for cloud deployment model over the years ahead.

Enterprises across APAC region have been increasingly deploying NFV technologies to support rapid deployment of services and applications. The APAC intent-based networking market is projected to record a CAGR of more than 31% over 2019-2025, owing to the increasing digitalization across small and medium scale enterprises (SMEs). Growing deployment of virtual network across the region will further augment the product demand over the estimated timeframe. 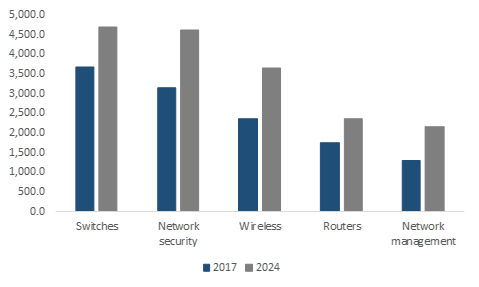 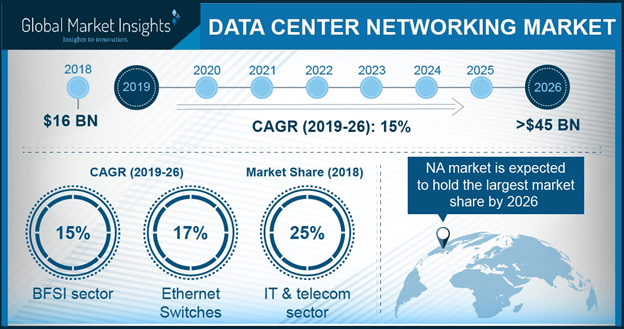 Global Market Insights Inc. announces a new study based report on router and switch market. The market size is estimated to be worth USD 41.02 billion by 2022. The report is a professional and detailed qualitative market research on the current scenario of the key regional markets. It also features a comprehensive discussion about the market trends, aspects like drivers, restraints, opportunities, challenges that impact SP switching and routing device market. The boom in adoption to cloud computing solutions is likely to propel the Router and switch segment.

Get a Free Sample Copy of this Report @ https://www.gminsights.com/request-sample/detail/174

North America router and switch industry is expected to be worth USD 15.5 billion at a growing CAGR of 2% during the forecast timeframe. The surge is attributed to noticeable growth in backhaul investments in the region. Asia Pacific, China in particular is projected to witness a substantial growth due to increasing demand for high-definition content and multi-screen delivery.

Key market participants are profiled in the report with comprehensive analysis of business strategies, products and services, current trends and finance metrics. Cisco Systems, Juniper Networks, Alcatel-Lucent, ZTE Corporation and Huawei Technologies are some of the major players in the router and switch market.