The rapidly rising demand for navigation technology, weather monitoring, and remote sensing is certain to augment satellite launch vehicle market growth over the ensuing years. Indeed, authentic surveys vouch for the vast expanse of this industry across the globe. According to the 2017 State of the Satellite Industry Reports, satellite launch services industry revenues including all commercially-competed launches of 2016, increased by 2% to USD 5.51 billion after having experienced a drop by 9% between 2014 to 2015.The rising availability of disposable income amongst the urban population has prompted the usage of mobile phones and navigation devices. Escalating use of the internet, VoIP, online digital payment services and IoT are playing a key role in the enhancement of communication. Reportedly, in 2018, the number of internet users has risen by 7% y-o-y to 4.022 billion, social media users by 13% to 3.196 billion and mobile phone users up by 4% to 5.135 billion globally. Growing connectivity requirement through radio, TV, as well as telecommunication mediums will drive the deployment of communication satellites, thereby propelling the satellite launch vehicle market over 2018-2024. 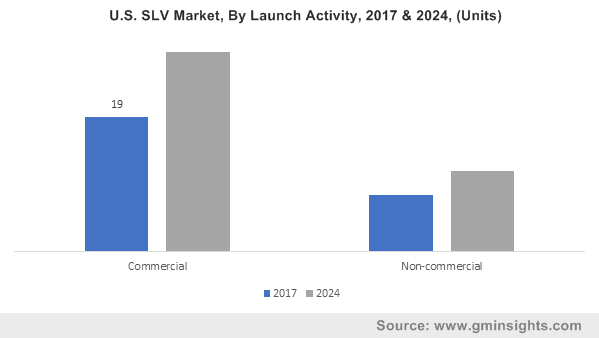 Geosynchronous satellites contributed to over 65% of the overall satellite vehicle market share in 2017. Indeed close to 34 launch missions in the GEO orbits were recorded in 2017 due to their precise applications in observational data analysis and national security monitoring. The growing demand for geosynchronous satellites on account of their benefits will robustly impel the GEO orbit based satellite launch vehicle market share in the years ahead.

Speaking of commercial satellites, it is prudent to mention that satellite launch vehicle market size from commercial satellites will witness a CAGR of 3% over 2018-2024, owing to the increasing requirements of these satellites in end-use industries such as earth observation, mineral & energy exploration, electronics, military, and telecom. The surge in the number of launchers incorporated with built-in automated navigation systems that are highly beneficial in the event of communication failure will positively influence the satellite launch vehicle industry share from commercial launch activities.

Get a Sample Copy of this Report:@ https://www.gminsights.com/request-sample/detail/2853

The India space launch vehicle market has also witnessed a rapid growth in the recent years. In 2017, the Indian Space Research Organization (ISRO) launched a record-breaking 104 Nanosatellites into the orbit all using a single rocket. The Indian space agency is known for building space launch vehicles with minimum labor cost and locally sourced equipment. Reportedly, ISRO’s commercial arm, Antrix has earned Rs 5,600 crore in the last three years, solely through the commercial activities including the launch of commercial satellites as well as remote sensing services. It is thus rather overt that India SLV market stands to gain considerable returns in the ensuing years. Driven by the efforts of economies such as India and China, APAC SLV industry trends are expected to undergo a dynamic change over 2018-2024.

Satellite Launch Vehicles (SLV) carry satellites and payloads from earth’s surface to space. Launching an SLV requires high precision, accuracy, power, efficiency and immaculate planning. Most of the SLVs are designed for one-time use however, upcoming advance SLV technologies introduced by companies like SpaceX would offer use of a single SLV multiple times eventually saving millions of dollars’ worth of capital. In essence, the efforts of leading contenders is likely to aid the growth of SLV industry, slated to hit $2.4 billion by 2024.