Side By Side Vehicles

The growing acclaim for luxury adventure sports, especially across the urbane locales, has led to the commercialization graph of power sports market depicting a robust rise. Advanced power sport vehicles like jet skis, ATVs, snowmobiles, side by side vehicles, and on and off-road motorbikes have come to occupy a prominent position in the sports and entertainment industry. As the popularity of recreational activities continues to soar, the demand for these vehicles will also depict an upsurge, gradually propelling global power sports industry size. 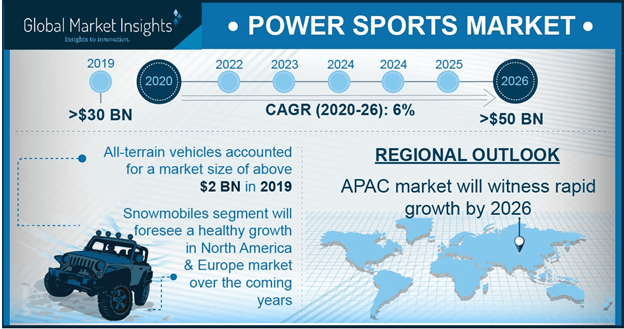 One of the most pivotal driving factors of power sports market is the expanding tourism industry. As per the World Travel & Tourism Council (WTTC), the travel and tourism industry accounted 10.4% of the worldwide GDP in 2017. The sector also accounted for 313 million jobs in the year – nearly 10% of the total employment in 2017. As the popularity of tourism exhibits an upsurge, the demand for luxury vehicles for recreational sports will depict a rise, gradually propelling power sports market size, slated to surpass USD 14 billion by 2025.

North America, in 2018, emerged as one of the dominant regions in the global power sports market landscape. The credit for the same can be attributed to the presence of leading vehicle manufacturers in the region. Major power sports market players have been striving to incorporate ATVs and motorbikes with highly advanced features in order to deem them fit for recreational activities, spiking consumer interest and eventually increasing the demand for these vehicles in the regional power sports industry. One of the most proactive players in this regard is Harvey-Davidson, that has been launching specialty stores as well as dealerships to expand its consumer pool. Enlisted below are a couple of initiatives by the motorbike giant that are certain to impact the commercialization matrix of North America power sports market:

Get a Sample Copy of this Report:@ https://www.gminsights.com/request-sample/detail/1688

The ongoing technological advancements in the automotive sector have been majorly responsible for the growth of power sports market, given that automakers strive to provide vehicles with higher efficiency, increased power, modern designs, lighter weight and better performance. Furthermore, luxury vehicles are now equipped with advanced features like Bluetooth connectivity, mobile tracking facilities, GPS navigation systems, electric starter and striking user interface displays to effectively meet consumers expectations. The increasing purchasing power of consumers across the globe in tandem with the ability to purchase inventory online has provided many manufacturers with novel growth avenues, gradually augmenting the revenue scale of global power sports market in the years ahead.