The rising terrorist activities across the world has led to high demand for arms & ammunition, thereby fueling global ammunition market size. Stringent measures introduced by the governments of various countries to fight against terrorism and heated inter-continental disputes will also spur the industry trends.  According to Global Market Insights, Inc., “Worldwide ammunition market was worth USD 9 billion in 2015 and is slated to record an annual growth of 2.8% over the period of 2016 to 2025.” The growing investments in R&D activities to enhance and develop technologically advanced weaponry coupled with the concerns regarding national security will bring forth lucrative avenues for the global ammunition industry. 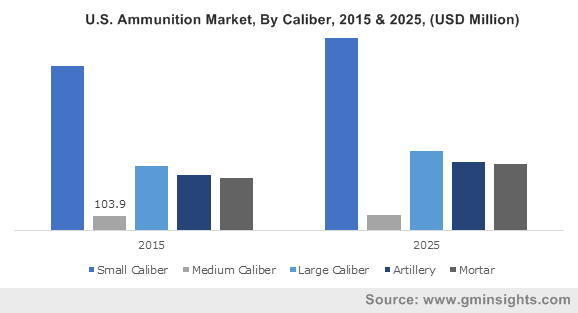 Taking into consideration the products, ammunition industry is segmented into artillery, medium caliber, mortar, large caliber, and small caliber. Mortar ammunition market will exhibit an annual growth rate of around 3.3% over the period of 2016 to 2025, owing to its surging usage in low firing pressure arms. Small caliber ammo is predicted to record notable growth rate over the coming eight years. The product demand can be attributed to its high demand across civil and military applications, owing to its ease of application and easy availability.

Get a Sample Copy of this Report @ https://www.gminsights.com/request-sample/detail/261

Defense and civil sectors are the two prominent application areas of ammunition market. Defense sector led the application landscape in 2015 and will continue its dominance by occupying more than 50% of the total industry share over the period of 2016 to 2025. Ammunition market size in civil applications will also grow lucratively over the coming timeframe, driven by its high demand in Law enforcement, self-defense, entertainment, and sports activities.

Considering the regional landscape, North America ammunition market is slated to exhibit noticeable growth rate over the coming eight years. U.S. will cover more than 90% of the North America regional share by the end of 2025. The growth can be attributed to its increasing requirement for shooting sports and the defense sector.

Asia Pacific ammunition industry accounted for 28% of the global revenue in 2015 and will register a lucrative growth rate over the period of 2016 to 2025, owing to the huge allocation of financial budgets for the defense sector. The rising demand for ammunition in sports and entertainment activities will also favor APAC market growth significantly.

Russia ammunition market will generate considerable revenue over the next few years, as it is a prominent arms producer. In addition, Russia is the main distributor of the defense equipment across the world.