Global hydropower industry is spectating a robust growth path over the years ahead, subject to the fact that clean, sustainable power generation from water, one of the most abundantly available renewable resources, is gaining renewed prominence at the global level. Hydropower is most widely utilized renewable source of power generation. The industry has been a subject of vital importance for advanced research institutes, which have been striving to deploy high capacity products for massive power generation applications, which will subsequently propel hydropower market. As per the IEA (International Energy Agency), hydroelectric held more than 80% of the total renewable energy mix. 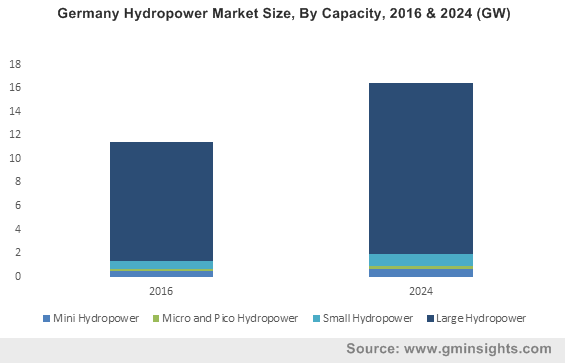 Increasing measures to reduce carbon footprints and the escalating demand for reliable power sources have fueled the growth of global hydropower industry. A report by Global Market Insights, states that, Hydropower Market in 2016, was worth more than 1000 GW in terms of volume and is projected to surpass 1300 GW by 2024, expanding at an annual growth rate of 2% over the period 2016-2024.

Based on product capacity, hydropower market is segmented into micro, pico, mini, small, and large hydropower stations. Small Hydropower Market size is expected to grow at 2.5% over 2016-2024, which will augment the overall market trends. This is possible due to the product versatility, reduced investments, and renewable nature. Mini hydropower market contributed to 2% of global hydropower industry share in 2016, owing to its low environmental impact and cost-effective characteristics. Growing investment in electric infrastructure to upgrade to smart off grid networks has further augmented the mini hydropower market. For instance, in 2016, the Government of Malaysia, launched the Sarawak Alternative Renewable Energy Scheme which plans to integrate micro hydro power plants for rural electrification in the region.

Get a Sample Copy of this Report @ https://www.gminsights.com/request-sample/detail/1602

Several countries of North America, Asia Pacific, and Europe have introduced plans to upgrade, modernize, and renovate their existing stations to ensure more efficient operations. For example, EU Renewable Directive (2009/28/EC) wants all the state members to target at least 20% of the final energy consumption from renewable sources by 2020. In an attempt to follow the EU Renewable Directive, from the total electricity produced in Europe, hydropower accounted more than 13.2% in 2014.

Rapid industrialization and urbanization in China have generated colossal growth opportunities for hydropower industry players, as China plans to invest USD 3.6 billion in Myanmar’s Myistone unit. This will help the Myistone unit to generate 6000 MW of hydropower by 2030. Moreover, in its 13th Five Year Plan, the Government of China announced plans to implement clean energy sources and also proposed the installation of 340 GW of hydropower stations by 2020. The massive growth of global Offshore Hydropower Market is also bound to positively influence the overall industry trends.

In North America, substantial funds have been raised toward developing sustainable energy, which has, in a way complimented the growth of hydropower industry. The abundant availability of natural resources will further help the region to prosper and contribute toward clean and reliable energy sources. In 2016, U.S. hydropower market accounted more than 50% of total regional share and is likely to continue its dominance over the coming years. For the United States, in 2015, Rey Development announced to inject USD 60 million in hydroelectric installation across the region.

The market players are adopting strategies such as mergers and acquisitions to expand their global reach. Some of the key players in the hydropower industry include General Electric, Ontario Power Generation, RusHydro, China Yangtze Power, Agder Energi, China Three Gorges Corporation, Alfa Laval, and Tata Power.

Global Small Hydropower Market size by installed base was more than 110 GW for 2015 and is predicted to register more than 2.5% growth during the forecast period. Demand for pure and renewable source of energy has resulted in growth of the industry. The reason being that hydropower is purest form of renewable energy and does not pollute the environment by emitting hazardous pollutants like carbon dioxide. Also, small hydropower needs less reservoirs and construction activity it has negligible impact on environment. Further, the industry is rapidly growing owing to favourable government policies and government subsidies, tax benefits & incentives.

In 2003, Voith Siemens won a $45 million engineering & procurement deal to deploy three small-scale hydropower units with overall deployment capacity of 60MW for Mexican firm comex hidro. These power plants were developed on the reservoirs to control floods and provide irrigation in Mexico.

Statkraft penetrated Indian hydropower industry in 2004 and was a first overseas firm to make investment in hydropower sector in India. It is involved in two big hydropower projects in India amounting to total 300 MW. The firm is further exploring new investment avenues within hydropower sector by partnering with Tata Power which is India’s biggest integrated power firm. Together the two firms have a license for new plant “Dugar” amounting to greater than 400MW in Indian state of Himachal Pradesh. 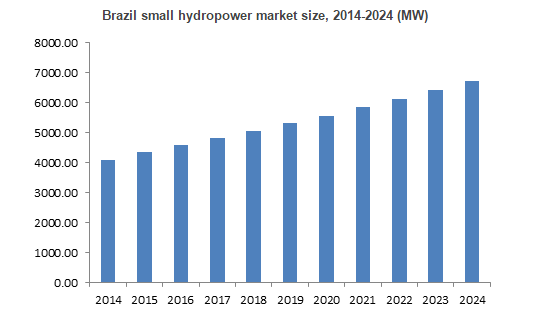 Europe was the second biggest small hydropower market in 2014. Italy led the regional industry with total installation of more than 3.1GW owing to its structured policies and high investments for industry growth.

North America small hydropower market is predicted to register CAGR of more than 2.5% during the forecast period. The region was third largest in terms of industry share in 2014. Canada and USA were dominant nations with many key small hydropower installations.

Get a Sample Copy of this Report @ https://www.gminsights.com/request-sample/detail/479

MEA small hydropower market is predicted to experience substantial expansion in future owing to rise in demand for electricity and renewable energy across nations like Egypt, Kenya and Nigeria in the region.

Key industry players profiled in the report include: