Asia Pacific intelligent transport system (ITS) market to record abundant gains by 2025, expanding automotive sector in the region to characterize the industry growth

The robust proliferation of the Internet of things, big data, analytics, and mobile technology has positively impacted the growth of ITS market since the last half a decade or so. The automotive industry in particular, which is expanding at an unprecedented pace, has come up to be a technologically revolutionized industry sphere. With the growing number of vehicles, there has been an immense demand for road safety and traffic management to enhance user travel experience. This rising demand to improve transport efficiency has undeniably influenced the expansion of the global intelligent transport system market. 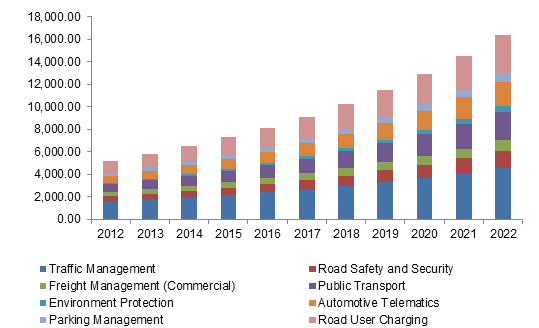 Traffic management has been a major challenge due to the growing number of vehicles and multimodal transport. The demand for safety, operational performance and transport efficiency is thus majorly driving the demand for ITS market. Moreover, rising environmental concerns as a result of pollutant emission and depleting fuel resources is also fueling the growth of ITS market to enable congestion free transport.

The system improves the transport efficiency by offering features like traffic prediction, traveler information, advisory services, analytics and decision support, ticketing and fare collection, roadside sensors, global positioning systems, and radio frequency tags. ITS services enable vehicles to share positions and data with each other as well as with the network and road infrastructures. On these grounds, ITS is being adopted worldwide to build improved transport strategies, thereby marching towards ‘smart transportation’.

Get a Sample Copy of this Report @ https://www.gminsights.com/request-sample/detail/178

Developed economies North America and Europe have apparently made it compulsory for the vehicles to use ESC (Electronic Stability Control) in public as well as private transport. Indeed, the extensive traffic movement on roadways has led to a spurt in the demand for innovative traffic management methodologies.

Another major factor propelling the adoption of ITS is the extensive rise in the number of road accidents globally. As per the 2017 Road Safety Annual Report of the International Transport Forum, road fatalities in the U.S. surged by 6.3% between 2010-2016, that has been a matter of concern for the regional government agencies. The U.S. DOT (Department of Transport) as a matter of fact, has started a Federal ITS program that supports the manufacturing of intelligent vehicles and endorses the implementation of intelligent infrastructure. The growing adoption of ITS and the presence of favorable government norms and promotional activities will thus drive the growth of the U.S. ITS market over the coming years.

Speaking of the regional terrain though, it comes as no surprise that the Asia Pacific is one of the leading markets for the expansion of the ITS industry, given the widespread scope of the automotive sector in the region. According to Global Market Insights, Inc., APAC is anticipated to account for the second largest share of the overall ITS market by 2025, driven by the fact that the pivotal regional economies such as India, Japan, and China have been making hefty investments in megacities and have also been modernizing their transportation networks for facilitating enhanced trade exchanges.

The APAC is also remnant of major government initiatives that are being undertaken for to combat the rising air pollution levels, which would further add momentum to the growth of the APAC ITS market.

The robust implementation of the intelligent transport system in the automotive as well as other transportation sectors such as airways, railways, and maritime, will positively impact the commercialization graph of the overall ITS industry. The system is not just a software solution, but is indeed a much wider concept. The data collected by the deployment of ITS can be a major asset for the transportation industry, enabling manufacturers to get a detailed insight about their vehicle performance in various environments. Armed with a vision that targets ‘smart transport’, ITS market is all set to experience a remarkable rise in the coming years.