Rising demand for affordable and reliable communication services worldwide will be one of the key trends driving voice over internet protocol (VoIP) market growth over the forecast period. VoIP is a rapidly advancing technology that uses internet to make phone calls rather than conventional telephone systems. The cost of using a VoIP service is relatively low, especially for long-distance communication. Companies are increasingly leveraging VoIP solutions to improve their productivity and enhance mobility. 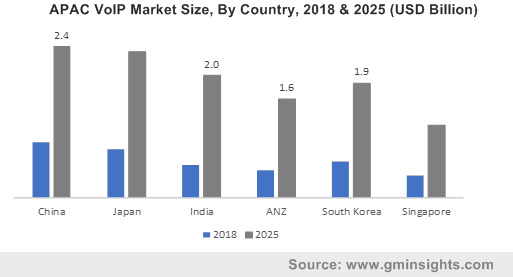 VoIP makes recording calls more efficient and easier, further enabling companies to integrate different communication services into a single device or software. With rapid technological advancements and recent innovations, VoIP market outlook has witnessed an immense transformation lately. For instance, in 2019, caller ID app Truecaller announced the beta-testing of its new app feature that allows users to make voice calls over IP. With such advancements, VoIP market trends are likely to expand and the industry players may garner a huge customer base, thereby augmenting business growth over the forecast period.

Get a Sample Copy of this Report:@ https://www.gminsights.com/request-sample/detail/2989

VoIP providers also allow users to make calls to landline and mobile phone numbers without any restrictions. Being internet-based, the technology can effectively handle media types such as images, videos and texts along with voice. Rising technological advancements will propel VoIP industry growth. For example, VoIP service plans come with advanced features like caller ID with name, call waiting, conference calls and call forwarding among other.

An instance of initiatives that will effectively generate new growth opportunities in VoIP market include the one made by North Dakota Department of Human Services which recently awarded a $3.3 million worth call center contract to Noridian Healthcare Solutions. The grant will support North Dakota’s Medicaid providers and customers by answering queries associated with Medicaid claims payment, submission of claims, and prior authorization.

Europe voice over internet protocol (VoIP) market will witness commendable growth over the coming years. Especially across Germany, the VoIP industry is recording lucrative growth on account of the region’s strong telecommunication infrastructure. Consumer demand and adoption of broadband high-speed Internet services is also considerable within the nation. With rising demand for cheaper communications service and increasing use of VoIP solution, the region is forecast to be a major ground for VoIP market growth over the coming years.

Supportive government initiatives are also likely to expand Europe VoIP market size over coming years. For instance, as per Europe 2020 strategy, all Europeans are expected to own fast broadband services (over 30 Mbps) by 2020, a mission for which EU has implemented a series of regulatory measures and policies and has made around €15 billion available to Member States in the period 2014-2020.

Global e-learning market to register a groundbreaking remuneration of USD 300 billion by 2025, North America to crop up as one of the most profitable regional grounds

The developments and innovations in learning tools, delivery methods, and digital technology have revolutionized global e-learning market with regards to its revenue and profitability quotients. Increasing numbers of e-learning programs coupled with the growing prevalence of online education across a myriad range of geographies is set to carve out a lucrative roadmap for e-Learning market outlook in the ensuing years. With an appreciable value holding to boast of, the global e-learning industry is expected to hit a remarkable valuation of USD 300 billion by 2025, claims Global Market Insights, Inc. Emerging corporate trends and the escalating popularity of online or internet-based learning programs are some of the pronounced factors fueling the e-learning market demand globally. 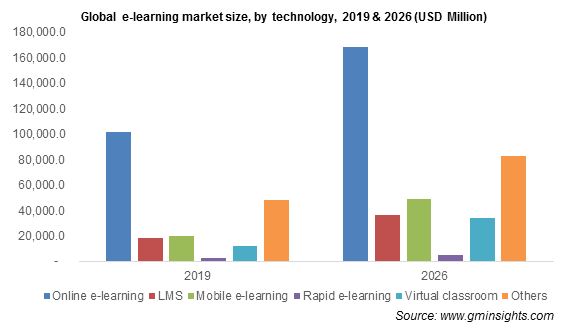 Instances validating the increasing penetration of e-learning tools include the CityCab’s launch of web-based training programs to provide linguistic training to taxi drivers in order to improve their communication with the commuters. Another such move was recorded when Infosys Ltd. entered in an agreement with three firms including Udacity Inc., EdX Inc., and Coursera Inc., to train their personnel on Artificial Intelligence via e-learning tools. Reportedly, The Indian Department of Electronics and Information Technology is also embracing e-learning centered research and development activities in some of the renowned institutions including IIT and C-DAC.

Gamification is one of the recent trends characterizing the innovation landscape of e-learning industry, as this category of education has recorded a rather high rate of engagement by the learners along with providing a better understanding of the related concepts.  The recent implementation of this trend was through McDonald’s, when the company partnered with City & Guilds Kineo to provide the till training on how to use a cash register. Reportedly, the process turned out to be highly effective and purposeful. The training involved real-time situations that required the learner to take customer orders in timed environment. As per reliable sources, over 85% of the users believed that learning via gamification learning helped them in better understanding new systems and improved their overall performance.

Get a Sample Copy of this Report@ https://www.gminsights.com/request-sample/detail/215

With such series of groundbreaking events, global e-learning market is certain to witness a rather substantial momentum in the coming years. Speaking of the geographical landscape, with significant rise in the enrollment of online programs and advanced learning methodologies, countries such as U.S., UK, India, China, and Australia are projected to be some of the most profitable avenues for the e-Learning industry growth.

Speaking along similar lines, North America, being one of the mature regions pertaining to the e-learning market penetration, is expected to be one of the most remunerative grounds for the global industry landscape over the coming years. Escalating adoption of m-learning and e-learning tools, which are becoming a preferred and viable choice for the corporate training programs, is one of the major factors driving the regional trends. Moreover, having an upper hand with regards to technological innovations, the region will further procure a major chunk of the global e-learning market share. As a matter of fact, North America, aided by the escalating product adoption by numerous organizations that intend to provide effective training to employees for high productivity, captured an appreciable 40% of the e-learning market share in 2018.

However, taking into consideration the future scope, where niche markets will witness a strong growth potential, Asia Pacific is deemed to be another significant region to exhibit a high demand for e-learning models. Industry analysts speculate that the widespread governmental initiatives to boost literacy and educational programs especially in the rural areas have rapidly escalated e-Learning market size in the region. An example supporting this fact is the initiative taken by HRD Ministry of Government of India with regards to launching NPTEL program as an e-learning approach to pursue courses in science, engineering, and humanities. Furthermore, increasing popularity of mobile technology in the region has further provided a major push to Asia Pacific e-learning industry size.

Speaking of the competitive and strategic terrain, most of the e-learning market players are vigorously working toward bringing technology and education under one roof. M&As, partnerships, and product & solution innovations are few of the major growth tactics adopted by the industry participants. Over the coming years, the fraternity is expected to witness a highly intense competitive landscape, where technology innovations will be one of the most renowned success parameters. With these trends, it is rather overt for the e-learning industry to be coined as one of the most innovative business domains, with a huge potential for developments in the coming years. 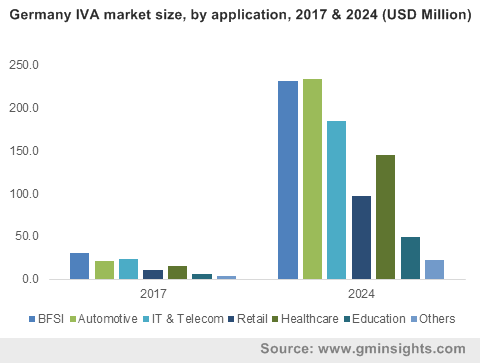