With the standardization of various fire safety norms, smoke pressure system market has gained a remarkable recognition at a global scale. The NFPA takes it upon itself to enlist all the mandatory roll outs regarding the design, installation, inspection, and maintenance of fire safety systems. When it comes to smoke pressure system industry, the standard code that the manufacturers need to comply with is NFPA 92. The sole purpose of NFPA 92 is to establish the burgeoning requirement of controlling the spread of smoke in the best possible way not only for the building occupants but also for firefighting staffs using stairwells. Considering the rising instances of fire accidents worldwide, it is apparently coherent that the backing of these administrative standards is highly critical for smoke pressure system market. 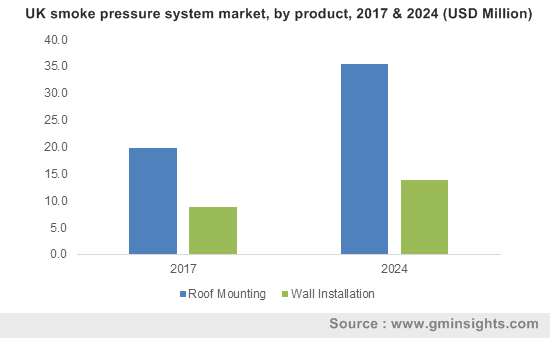 As per NFPA estimates, the U.S. fire departments addressed approximately 358500 home structures fires annually over the period 2011-2015. In this regard, it is prudent to mention that a major share of fire borne casualties are caused due to smoke inhalation of the toxic gases produced by fire. Actual flames or burns are responsible only for 30% of injuries or deaths. It can be apparently inferred that smoke pressure system market demand would upscale over the ensuing years, given the earnest requirement of installing these systems to combat the distressing scenario.

Speaking of the product landscape, smoke pressure system industry has gained tremendous monetary benefits from the sales of roof-mounted systems. In fact, roof-mounted based smoke pressure system market accounted for a lion’s share of 65% of the global revenue in 2017. The extensive growth can be majorly attributed to its enhanced capability of removing the harmful effects triggered by high temperature and humidity.  In addition, subject to its anticorrosive galvanized steel structure, roof mounted systems also seem to be a viable option during extreme climate conditions.

Get a Sample Copy of this Report@ https://www.gminsights.com/request-sample/detail/2598

It is imperative to mention that roof mounted smoke pressure system market has amassed a huge popularity in high-rise building applications, owing to its user-friendly layout that works seamlessly with the provision of vents on multiple floor structure. There has been a growing concern in the fire protection industry regarding the compatibility of superstructures with fire-safety standards. This is perhaps due to the fact that in these tall infrastructures, smoke can spread to upper floors through vertical openings, elevator shafts, and stairwells. In consequence, toxicity and visibility become major concerns. Although some of the modern buildings are incorporated with fixed smoke management systems, these systems are not intended for complete fire suppression and overhaul activities, according to 2009 International Building Code Section 909.1. With the regulatory framework becoming more stringent to deploy efficient stairwell pressurization systems, the profitability quotient of smoke pressure system industry is certain to augment.

In fact, the importance of stairwell pressurization has already been identified globally with the multitude of efforts undertaken by the smoke pressure system market players to enhance the product portfolio. These players are highly backing on research and development activities to come up technologically advanced systems that are absolutely in compliance with the regulatory standards. Geographically, the market has already gained prominence in the United States and the regional business space is slated to witness a CAGR of 7% over 2018-2024. However, high maintenance cost along with difficulty in its designing in high rise structures may somewhat deter the smoke pressure system market growth path in the coming years. Nonetheless, with the product landscape anticipated to witness an appreciable expansion, smoke pressure system market is certain to chalk out a profitable roadmap in the years ahead. In terms of commercialization, the overall industry would exceed a valuation of USD 590 million by 2024.