With a plethora of tech innovations to boast of, data center UPS market has been traversing along a profitable growth path in recent years. The competitive spectrum of data center UPS industry is inclusive of some of the most renowned names, such as Schneider Electric, Mitsubishi Electric, ABB Ltd., Fuji Electric, Eaton Corporation, Delta Electronics Inc, General Electric, Ametek Inc., Vertiv and Toshiba Corporation among others. Most companies among these have been attempting to bring about a change of dynamics in data center UPS market, by means of novel product launches depending on consumer demand. For instance, Vertiv has recently launched Liebert EXS, a UPS with the lowest footprint in its class. The product apparently is a monolithic, transformer-less UPS in a small form-factor that houses up to four battery strings. According to Vertiv, the device can reduce the space required for power backup by up to 50%, when compared to products from its competitors. Undeniably, the product is expected to stir up a storm in data center UPS market, which as per analysts, amassed a revenue of USD 3 billion in 2016. 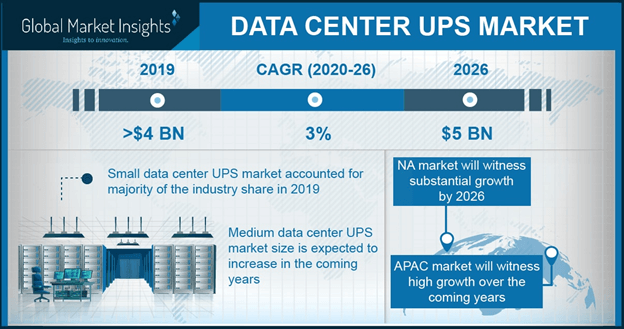 The deployment of data centers has been growing with the robust expansion of the tech space and the subsequent rise in data usage. The exponential adoption of technologies such as cloud computing, Internet of Things (IoT) and machine learning as well as the upsurge in the usage of online services such as Amazon Prime and Netflix has generated the demand for continual speed, reliability and security. In consequence, this has led to data center UPS market witnessing a significant boost. In fact, as per statistics, data center UPS industry size is estimated to grow at a CAGR of more than 3% over 2017-2024.

Get a Sample Copy of this Report:@ https://www.gminsights.com/request-sample/detail/116

While the deployment of data centers spans myriad sectors, the healthcare, BFSI and manufacturing domains are claimed to be the chief end-users of data center UPS industry. These industries, especially the banking sector it has been observed, has been particularly deploying the online UPS solution for increased performance. This goes to prove that one of the most crucial components of this business vertical, the online data center UPS, has gained mass precedence in recent years. A pivotal reason for the same is that these systems are unbelievably useful in critical business applications such as telecom and IT, which demand high voltage, frequency regulation, and power conditioning. Furthermore, this solution is highly preferable due to its advantage of converting the incoming power two times over, eliminating disturbances and providing clean and regulated voltage, which has had a massive impact on the commercialization scale of online data center UPS industry share.

North America, the hub for tech advancements, accounted for close to 30% of the overall data center UPS market share in 2016, driven by rapid expansion of the manufacturing, IT & telecom, entertainment, and healthcare sectors. Furthermore, data center UPS market companies have been striving to come up with innovations on the home ground so as to increase the momentum of the regional industry. For instance, Fuji Electric Corp Of America has recently come up with their latest UPS system – the UPS7300WX-T3U, which is apparently a transformer-less UPS that can withstand an explicit load and environmental condition of the data center. The system utilizes Fuji Electric’s patented RB -IGBT Technology to deliver up to 97.5% efficiency, and is likely to heavily impact the product landscape of North America data center UPS industry.

Major companies across data center UPS market have been adopting tried-and-tested growth strategies based on the grounds of quality, technology, price, distribution, service and brand. As the tech cosmos depicts massive growth prospects in the years ahead, it is expected that data center UPS market trends would undergo a considerable change of sorts, which would substantially impact the revenue graph of this business vertical. As per Global Market Insights, Inc., data center UPS industry size is expected to cross a valuation of USD 4.5 billion by 2024.