Conveyor belt market from the F&B sector to register the fastest CAGR over 2019-2025, proliferating packaged food consumption trends to augment the industry landscape

A highly profitable vertical of the expanding construction space, conveyor belt market stands tall in terms of revenue in today’s industrial cosmos. With the global populace growing consistently by the day and improving economic conditions, the commercialization prospects of food & beverages industry has observed quite an incline. As conveyor belts have become an integral part of any typical F&B production facility, it goes without saying that the expansion of the F&B space will help conveyer belt industry chart out a lucrative growth path in the years ahead. 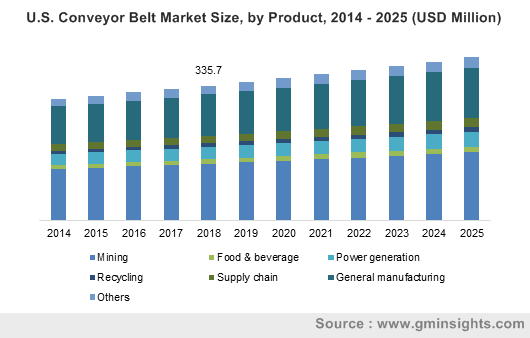 According to Cushman & Wakefield, the world’s food & beverage industry has witnessed healthy growth over the previous decade and is expected to grow further in the years ahead. In fact, the lure of food is expected to become a crucial motivator behind the construction of public spaces such as shopping centers & parks experiencing substantial footfall on a daily basis.

Meanwhile, the adoption of conveyor belts across the world’s mining sector is on the cusp of witnessing a complete overhaul as the industry undergoes a digital transformation in an attempt to move itself beyond stagnant growth and deliver exceptional value to the shareholders, the customers as well as the environment. Driven by technological advancements and given the product’s ability to boost production by a substantial margin while also cutting down labor costs, the conveyor belt industry is expected to consolidate itself as the backbone of the world’s manufacturing sector, mainly characterized by mass production.

According to the Franchise India Holdings Limited, the economic growth experienced by developing nations such as India, Brazil, Russia & China is bringing significant changes to the regional meal consumption landscape. An increasing preference toward packaged food purchase has been observed, thereby providing a lucrative growth opportunity to the conveyor belt market players.

The Drivers: Urbanization is being highlighted as a key driver promoting the expansion of the F&B industry. The populace across the developing nations are immigrating to emerging cities in search for better opportunities, which is making a conspicuous change on their lifestyles & eating habits.

Most of the population sprawled across urban locales seem to often struggle to find the time, or the energy required to preparing their own meals & beverages from scratch at home, which increasingly pushes them towards packaged food & beverages. This consequently leads to the F&B sphere experiencing an exponential growth, bringing about renewed prospects to the global conveyor belt market.

Get a Sample Copy of this Report:@ https://www.gminsights.com/request-sample/detail/3267

The Numbers: According to the World Economic Forum, as the global population rises to 9.7 billion by 2050, it is estimated that humanity would require 70% more food than it is consumed today. With a majority of the aforementioned population slated to live in urban areas, packaged food & beverages would be accounting for a significant chunk of the meal requirements, ensuring an abundant source of growth for the global conveyor belt market.

The Projection: The packaged processed food industry of India alone is estimated to be worth somewhere between $10.87 billion to 13.05 billion. With rapid urbanization and the subsequent rise in the population migrating to cities, the conveyor belt market share from F&B applications is expected to witness a CAGR of more than 4.5% over 2019-2025.

The Impact: The influx of substantially high-grade technological advancements have made it possible for conveyor belts to be used on a large scale in the mining sector. Digital technologies are expected to enable the market foray beyond its current stance through automation, operational hardware & robotics.

The Numbers: The World Economic Forum estimates that the digitalization of the mining industry would be bringing in more than $425 million of value to the sector by 2025.

The Projection: The growing demands from mining operations, coupled with the digital transformation of the industry, are expected to provide the conveyor belt market the footing it requires to attract more investments over the upcoming years.

Driven by the digitalization of the mining industry and the expansion of the F&B space, the global conveyor belt market is expected to command significant growth in the years to come. In fact, a Global Market Insights, Inc., report estimates that the conveyor belt market size would be surpassing the $5 billion renumeration mark by 2025.