With rising efforts to curb power outages in emerging economies & the rapid implementation of T&D systems worldwide, surge arrester market has charted a course of immense growth in the last few years. The product is used to protect equipment from over-voltage transients in T&D systems caused by internal switching events or by lightning strikes. Rapid industrialization across emerging countries along with increasing power generation capacities to meet electricity demands have also complemented the industry landscape. 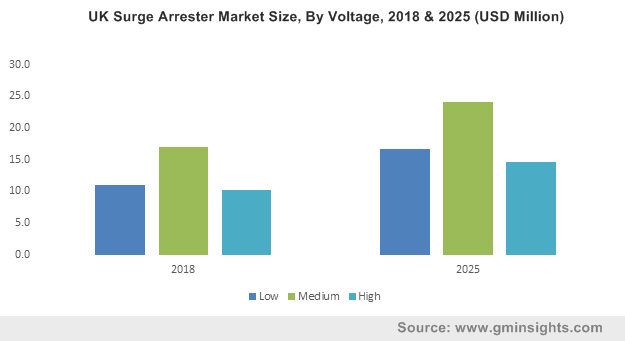 For instance, the average electricity consumption for households was estimated around 3,500 kWh in 2010, but has increased drastically in the last few years owing to rapid urbanization, facilitating the need of efficient overvoltage protection solutions to optimize the continuity of power services whilst ensuring personal safety and reduced immobilization costs.

How will the rising occurrences of lightning strikes amplify product adoption?

A lightning strike has the potential to destroy millions of home appliances across a power grid. It can also cause significant amount damage to T&D equipment like power transformers owing to the injection of around 120 million volts of added voltage into the system. Indeed, a lightning strike can cause a transformer to blow, knocking out power to thousands of people or even leading to cases of electrical fire outbreaks, particularly in dry environments.

According to the National Fire Protection Association (NFPA) reports, during 2007-2011, the U.S. local fire departments responded to around 22,600 fires caused by lightning per year – the fires caused damage to direct property of around $451 million annually. To counter such damages, power stations operators are increasingly installing surge arresters to protect customer’s home appliances and power station infrastructure, which will in turn supplement the expansion of the global surge arrester industry.

Get a Sample Copy of this Report @ https://www.gminsights.com/request-sample/detail/2544

High voltage products, as per estimates, are anticipated to record extensive sales in the years to come. The product’s increasing use across HVDC (high voltage direct current) lines to drive AC and DC applications requiring power inputs of over 1,100kV will fuel the product demand. Moreover, rising infrastructure development projects in emerging nations to meet residential and industrial demands will also propel high voltage surge arrester market size, slated to depict a CAGR of 6% over 2019-2025.

In 2017, India revealed plans to construct an 800-kV transmission line capable of offering power to over 80 million people in the country. The increasing adoption of FACTS (Flexible AC Transmission Systems) to increase the reliability of line networks along with improved measures to protect transmission & distribution equipment from overvoltage will also stimulate the industry growth.

Speaking of the material preference, it is imperative to mention that polymer-based surge arresters find exceptional applications across numerous sectors. Owing to the easy installation & handling, low operational & manufacturing cost, reliable performance in tough environments and superior breaking resistance under overload scenarios, polymer-based surge arrester industry is likely to depict an expansive growth graph in the years ahead. Growing investments to upgrade existing power transmission & distribution infrastructure will also propel the polymer-based surge arrester market size, which was pegged at around USD 600 million in 2018.

U.S. to emerge as a prominent revenue ground for surge arrester market

Rising energy demands along with the growing focus on upgrading existing substations to improve power reliability have been touted to expedite the U.S. surge arrester market in the coming years. With a massive rise in the cases of transformer failure due to absence of proper power protection devices, the demand for these products is bound to increase exponentially. Moreover, increasing cases of lightning strikes in states like Florida will also complement the industry landscape.

Reports claim that, on an average, lightning strikes the Florida Power & Light (FPL) service territory over 300,000 times in a year, delivering currents ranging from 10,000 – 200,000 amps, that can induce voltages exceeding a million volts. To tackle such high voltage spikes, FPL has adopted surge arresters as its primary defense solution. As per the INMR, an estimated 1,545,000 surge arresters find home on the FPL distribution system, signifying that the region is an apt revenue pocket for the growth of the surge arrester industry.

These exceptionally efficient systems, are massively used worldwide to protect electrical equipment and power system installations against internal switching events and lightning surges. Surge arresters can also directly divert overvoltage to the ground to protect the equipment from damage. Considering their exponential demand graph, it wouldn’t be incorrect to state that the global surge arrester market size of bound to increase by the day, with a target revenue estimation of $2 billion by 2025.