The rising number of R&D programs on self-healing hydrogels has assisted the rapid self-healing gel market share soar to new heights. Widely applicable in drug delivery, wound dressing, tissue engineering, and surface coating, rapid self-healing gels are known to have excellent properties along the likes of hydrophilic nature, adequate flexibility, high sensitivity to the physiological environment. The ever-expanding global healthcare sector has been a significant factor in impelling the remuneration scale of rapid self-healing gel industry in the last few years. 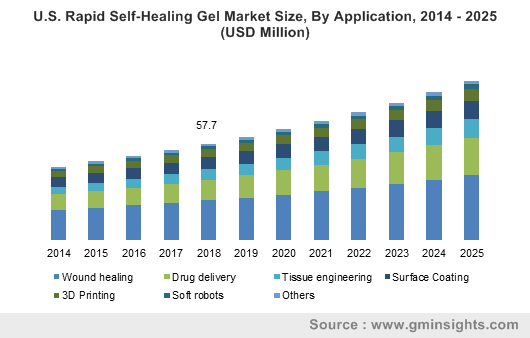 Researchers have previously developed self-healing hydrogels for biomedical usage by creating unalterable chemical linkages between polymers. Sturdy and tough, these gels have also been used to manufacture soft contact lenses but their shape cannot be altered easily after they are formed.

However, this phenomenon is likely to change in the near future as new hydrogels which can be molded into specific shapes are being developed to deliver drugs. For instance, chemical engineers from Massachusetts Institute of Technology unveiled a new type of self-healing hydrogel in 2015. Apparently, this gel can carry one or two drugs at a time and can be injected through a syringe.

Elaborating further on the applications of this gel, it can be used to deliver drugs that could repair degenerated heart tissues following a cardiac arrest. Moreover, scientists are also looking into the possibility of utilizing such self-healing hydrogels to deliver cancer drugs to eliminate tumor cells that are left behind after surgery. Needless to mention, the development of such multi-purpose and highly-effective self-healing hydrogels would assist the rapid self-healing gel market size to expand at a swift pace in the forthcoming years.

Get a Sample Copy of this Report:@ https://www.gminsights.com/request-sample/detail/3271

Apart from drug-delivery applications, the rapid self-healing hydrogels are increasingly being viewed as advanced polymers with significant potential in wound dressing applications. Though they have gained popularity across healthcare sector in the recent years, they do have a few shortcomings such as lack of antibacterial properties and inability to fit the skin.

Apparently, the aforementioned limitations are being eliminated by researchers as they have now focused on creating new self-healing hydrogels with adhesive and antibacterial properties. For instance, the researchers from Xi’an Jiaotong University recently introduced an injectable, self-healing hydrogel for effective wound healing treatment. The new hydrogel has high adhesion which helps it to seal wounds for any shape rapidly – a characteristic especially helpful in treating joint skin damage. It swiftly bonds with the edge of the wound, therefore providing a physical barrier against contaminants while simulating moist skin conditions.

Considering the aforementioned research and development efforts across various regions of the globe to create new self-healing hydrogels, it can certainly be stated that the rapid self-healing gel industry would acquire a prominent position in the overall healthcare sector in the forthcoming years.

An overview of cell line development market in terms of competitive landscape, global share to register double-digit CAGR over 2018-2024

Regarded as a one of the rapidly progressing fraternities of the life science domain, cell line development market has established itself as a major business sphere of recent times. With tissue and cell-based assays rapidly swapping animal studies, researchers are increasingly becoming dependent on cell study to demonstrate greater biological relevance. As per the data put forth by the World Health Organization, neurological disorders and their consequences are anticipated to affect more than one billion people worldwide.

This data is evident from the rising aging population and lack of effective treatments – a factor also underpinning the necessity to develop new assays to advance research and develop know-how with regards to the mechanism of these diseases. Given the fact that both industrial and research concerns are demanding advanced & better cells for developing novel vaccines, biosimilars, drug, and therapeutic proteins it comes as no surprise that the global cell line development market has bright growth prospects. A conjecture substantiating the same is of a report compiled by Global Market Insights, Inc., that claims the global cell line development market to become a massive 7.5-billion-dollar industry by 2024, a substantial up from USD 3.3 billion in 2017.

When it comes to the vast utilization of the cell line development technology, Berkeley Lights Inc., is one protuberant industry magnates that has developed a platform to address the unmet research needs in Cellular Immuno-Oncology, BioPharma, and Autologous T-cell Therapies. Introduction of Beacon platform by this company has undeniably changed the overall competitive dynamics of cell line development industry. In fact, it has been observed that several other market players are leveraging Berkeley Lights’ state-of-the-art technology to further dive deeper into cell line research.

Get a Sample Copy of this Report:@https://www.gminsights.com/request-sample/detail/429

According to reliable reports, Berkeley Lights, Inc. (BLI) launched its first commercial platform – Beacon™ OptoFluidic Platform in December 2016. This platform is ideally suited for direct B-cell antibody discovery and cell line development workflows. Experts deem that the flexibility of this platform has allowed researchers to automate biological processes and develop new applications to align with specific requirements. In short, the Beacon platform has enabled efficient monitoring, visualization, and tracking of cell to cell interaction and single cell manipulation across thousands of cells into a nanofluidic chip.

Recently in January 2018, BLI announced that Shire is implementing the Beacon Platform to accelerate their CLD process. Reports reveal that the company’s decision was based on an experiment and study that equated their existing cell line development workflow to the workflow results obtained using Beacon.

BLI in October 2017 announced that it will be working with the global pharmaceutical industry player Daiichi Sankyo to focus on creating CLD workflow efficiencies and fast tracking the drug development process. According to sources, the program includes evaluating and predicting the stability of clones, establishing monoclonality, and screening a pool of recently transfected CHO cells.

Pfizer to invests in mAb discovery with BLI’s Beacon tech

In a recent news snippet released in January 2018, it has been reported that Pfizer is leveraging BLI’s Beacon platform to advance its gene editing programs and monoclonal antibody discovery.

Teva Pharmaceuticals Australia, recently announced that it will be installing Beacon for its CLD and antibody discovery programs. Bayer Inc., is another in the line that has announced a strategic project with BLI to innovate and accelerate research. The pharmaceutical giant Novartis is also not far behind in implementing the Beacon platform. In fact, reports reveal it to be an earlier adopter of this technology and to consequently have secured its position in the dynamic cell line development market. 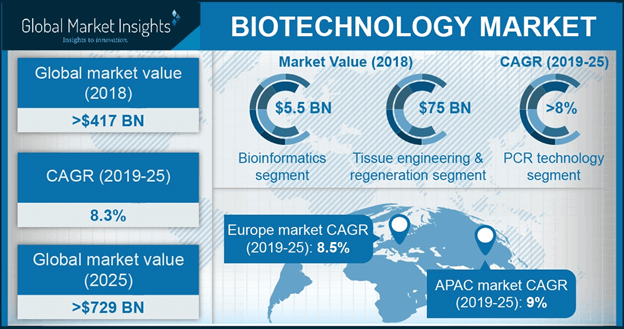