As climate change continues to cause intense and frequent weather-related disasters, U.S. portable generators market size has proliferated at a remarkable pace over the recent years. In 2013, the U.S. Department of Energy and the White House Council of Economic Advisers released a comprehensive report which rightly demonstrates the growing prominence of U.S. portable generators industry space across power generation sector of the nation. Apparently, the report, named as Economic Benefits of Increasing Electric Grid Resilience to Weather Outages reveals key findings on major causes of economy-damaging power outages across the nation. According to the estimates noted in the report, the power outages caused by severe weather between 2003 and 2012 cost the American economy almost USD 18 billion to USD 33 billion on a yearly basis. 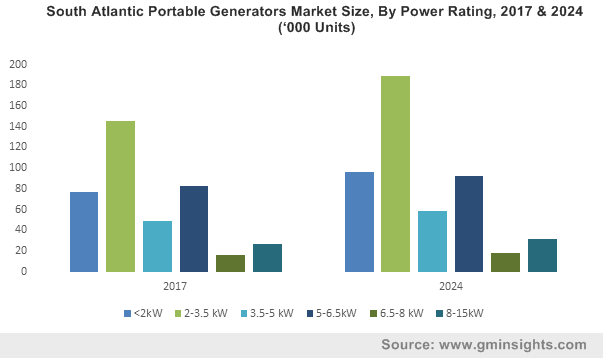 Apart from extreme weather events, the aging electric grid infrastructure across the U.S has emerged as a major cause of power outages. This has, in consequence, led to enhanced product demand from a range of end use sectors such as residential, commercial, and construction among others. The report further mentions that approximately 679 power outages occurred between 2003 and 2012 predominantly due to vulnerable electric grids and weather-related disasters. Apparently, these crucial statistics go on to validate the increasing number of business opportunities being opened up for the U.S. portable generators market participants who have been focusing on facility expansion projects of late.

Citing an instance to highlight the efforts that are being undertaken by U.S. portable generators industry participants to expand their production facilities, HiPower Systems has recently announced to have finalized the purchase of a new USD 24 million industrial complex in the state of Kansas. Subsequently, the leading U.S. portable generators market player intends to establish its headquarters at the latest location.

Get a Sample Copy of this Report @ https://www.gminsights.com/request-sample/detail/2485

More importantly, the production unit of the company’s newly designed high grade and Tier 4 Final-compliant portable generators is likely to be housed within the latest facility. Moreover, the design, engineering, manufacturing to sales and after-sales support would be conducted from the premises of the new facility.  Concurrently, it is quite prudent to state that the instance of HiPower Systems’ facility expansion stands as an indicator of the fact that firms partaking in U.S. portable generators market are consistently attempting to fortify their presence in this swiftly flourishing business space. In fact, as per a research report collated by Global Market Insights, Inc., the overall remuneration portfolio of U.S. portable generators industry stood at around USD 1.2 billion in 2017.

Speaking in terms of regional growth prospects, the South Atlantic terrain is expected to contribute immensely toward the overall U.S. portable generators market share augmentation in the ensuing years. The ever-increasing intensity of hyperactive hurricanes in this region has stimulated the product demand in the recent times. For instance, the region witnessed 6 highly devastating hurricanes of Category 3 and 18 storms in the year 2017. The most notable among these was the Hurricane Irma which slammed into the state of Florida and reportedly impacted more than 64 percent of all residents of the state. Apparently, it is quite imperative to mention that South Atlantic region’s share in the overall U.S. portable generators market, owing to the aforementioned factors, is bound to surpass an annual shipment of around 400,000 units by 2024, as per reliable estimates.

As the customer dependency on power backup solutions escalates in the near future, the overall U.S. portable generators market size is anticipated to witness an upward trend of progression over the estimated timeframe. Moreover, the escalating need for consistent electricity supply coupled with the aging and fast-deteriorating grid infrastructure would augment the product penetration across the United States. With the rising instances of natural disasters including floods, hurricanes, earthquakes, and wind storms that result in prolonged power outages, the U.S. portable generators industry is set to surpass an annual shipment of about 1.5 million units by 2024.