Augmented Reality Market to witness a commendable CAGR of 65% over 2017-2024, automotive sector to drive the application landscape

Having established itself as a rather prominent vertical of the technology sector, augmented reality market has witnessed phenomenal gains, in terms of remuneration over the recent years. In the field of software, this technology is already approaching mainstream awareness, primarily on account of the profound contribution of renowned tech giants like Blippar, PTC, Daqri, Upskill, Samsung Electronics Co. ltd., Magic Leap, Facebook Inc., and Apple. While the increasing popularity of Apple’s flagship augmented reality technology, ARkit has already created a huge buzz in the augmented reality industry, the American conglomerate’s latest breakthrough, iPhone X is an exemplar precedent depicting the signs of penetration of the business space in the territory of smartphone hardware as well. Reportedly, the advanced TrueDepth camera of the product not only include Portrait Mode and FaceID feature, but can also detect users’ 3D data and dynamic expression via a unique facial recognition function, Animoji. Though the competitive terrain of augmented reality market is all inclusive of breakthrough innovations from other rivals as well, Apple, undeniably, has turned out to be one of the most active promoters of AR technology lately. 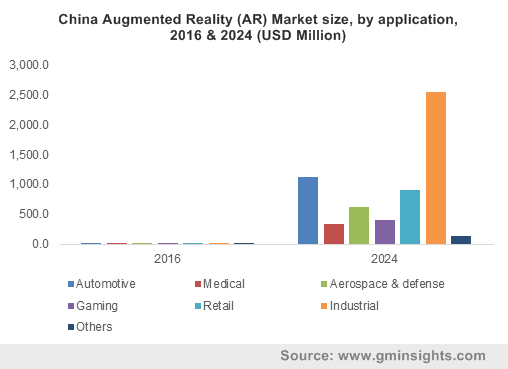 Primarily backed by the fact that AR technology has already made profound inroads in the automotive domain since the inception of 21st century, experts claim, augmented reality industry from this particular business sphere is set to gain exceptional proceeds over the coming years. Big shot automakers across the globe have been increasingly deploying this technology in a bid to bring next version vehicle manuals. Volkswagen’s MARTA (Mobile Augmented Reality Technical Assistance) app that provide a thorough repair assistance to amateur mechanics can be placed as a testament to the aforementioned fact. Add to it, the race to develop self -driving vehicles that is presently heating up the automotive space, is also expected to open up new growth opportunities for augmented reality market. Though automotive giants are highly excited with the changing trend, there is a still a wave of inhibition among the consumers due to dearth of proper know-how. Experts believe, increasing integration of AR technology in automobiles would bridge the gap, gradually encouraging consumers to get accustomed with the new technology. From navigation to improving automobile control, automotive sector, as per experts’ opinion, is reportedly one the most remunerative growth avenues for augmented reality industry.

Get a Sample Copy of this Report:@ https://www.gminsights.com/request-sample/detail/695

Recently, Mapbox, a reputed custom online maps provider, has made to the headlines with the announcement of its acquisition of a Minsk-based artificial intelligence unicorn, Mapdata. Among the various future projects that are claimed to get onboarded through the deal, Mapdata, reportedly, would help Mapbox develop advanced augmented reality based maps that work in sync with the front cameras of the users’ devices. With increasing number of companies seeking to leverage the maximum potential of the technology across mainstream as well as off beat applications, it is certain that augmented reality market is on its way to gain substantial momentum in the years ahead.

While the underlying technology and the application expanse of augmented reality market is rapidly advancing, one of the major constraints that is somewhat acting as a deterrent in the business penetration is the privacy vulnerability concerns associated with the technology. The integration of AR technology into any platform requires disclosure of personal info, which when mishandled often lead to privacy risks. However, renowned companies partaking in augmented reality market are readily investing in research activities to come up with innovative solutions that would address the rising privacy concerns.

Considering the robust initiatives being undertaken worldwide to harness the fullest potential of this technology, augmented reality industry, though still at a nascent stage, is certain to achieve phenomenal gains over the coming seven years. Estimates by Global Market Insights, Inc. claims the overall augmented reality market size to exceed a valuation of USD 50 billion by 2024.