The demand of robots has been accelerating across the world consequently increasing growth of robot end-effector market with expanding sales and supply. The latest average of global robot density is around 74 robot units per 10,000 employees in the manufacturing sector. In 2017, robot sales increased by 30% to 381,335 units. Robot sales in the automotive sector increased by 22% and the automotive sector remained the major customer of industrial robots with a share of 33% of the total supply in 2017.

Over 3 million industrial robots are estimated to be in use in factories throughout the world by 2020. As industrialization across the globe expands and more robots are deployed, robot end-effector market is anticipated to reap the benefits of such transformative trends.

Rising uses of robots in household chores and entertainment will give rise to the revenue share of robot end-effector market:

Call for assistant robots in routine life is progressing rapidly and helping robot end-effector market to grow. The number of domestic household robots has been expected to rise to 31 million between 2016-2019 globally. The advancements are empowering substantially capable end-effectors like five-finger humanoid robot hand to assist in domestic works. The sales value of robots that trim lawns, clean swimming pools, and floors, is expected to grow to about $13 billion in the coming period. In the upcoming years, floor and vacuum cleaning robots will continue to garner a lion’s share of units sold for household works. Sales of such robots will rise from 3.6 million to almost 30 million units within 2016-2019. Floor and vacuum cleaning robots account for 96% of domestic robot sales.

Get a Sample Copy of this Report:@ https://www.gminsights.com/request-sample/detail/4286

Such huge contributions by domestic and entertainment robots are going to help robot end-effector market to gain traction over 2019-2025.

Europe to emerge as a major regional contender in robot end-effector market:

Europe is predicted to be one of the top regions in the robot end-effector industry with the region’s inclination towards automation technologies in manufacturing. The region is observing the surging use of robots in agriculture, logistics, underwater, automotive, and other applications. Its most automated country is Germany, ranking third globally with 309 units of robots.

In 2016, in Europe, out of total of robot sales, the operational stock and annual supply of industrial robots had a share of 41% and 36% respectively. Robot investments have notably increased by 19% to 7,700 units in Italy. The French robot sector was up by 16% at around 4,900 units. In Spain, sales of industrial robots further increased to a new peak of 4,200 units.

Europe currently accounts for almost 32% of the global robot sector surging the revenue growth of robot end-effector industry. The region is anticipated to register similar growth patterns in the times to come.

Robots and robotic techniques have been playing an essential role in making automotive plants competitive. In recent years, more than half of industrial robots purchased in North America were bought by automakers. Out of the total demand for industrial robots, around 55% was generated by the auto sector alone. One fourth units of these are installed by car manufacturers. The automotive sector can be credited for 56% of all industrial robotics orders in North America and 35 percent of all new robotic sales globally in 2016.

For instance, ABB, a key the robot end-effector manufacturer, has reportedly entered into a deal with SAIC Volkswagen to offer robotics painting solutions for the latest New Energy Vehicle (NEV) factory. The factory is first large automated painting project offered by ABB for SAIC Volkswagen. The company will install around 300 robots to offer sealing and painting solutions on three automated painting production lines.

Having garnered the reputation of being highly technology-driven, automotive robotics industry thrives on the product innovations brought forth by leading business players. A recent instance citing the validity of the aforementioned declaration is Rimac’s collaboration with Dassault Systèmes. Elaborating further, the September of 2017 saw Rimac Automobili, a key manufacturer of high performance electric vehicles, battery systems, and drivetrains, join forces with Dassault Systèmes, a software firm based in France, to acquire the product lifecycle management digital platform from the latter to scale up its business growth. The latter’s 3D experience platform referred as electro mobility accelerator will help the former increase its production capacity and connect with its employees across 11 countries. This deal is an apt example that underscores the developments prevalent in automotive robotics industry. The continued trend of similar alliances are likely to encourage entrants explore newer markets – the autonomous car sharing market , for instance. 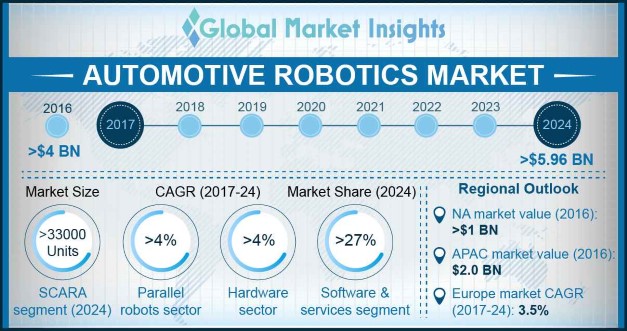 Pertaining to the stiff competition prevalent in the automotive robotics market space, companies have been devising a number of business tactics to consolidate their position. In September 2017, for example, Avnet Incorporation, a major participant across information technology and services industry, acquired Dragon innovation, a major producer of consumer electronics products. The acquisition is expected to assist both the firms add to their existing product line and expand their presence in automotive robotics market.

The month of September has also witnessed Technion – an Israeli tech institute, Korean Advanced Institute of Science and Technology, and Hyundai Motor Group forming an alliance to jointly complete the projects on artificial intelligence, autonomous driving, and cyber security. The collaboration has been touted to help the emerging automotive firms and startups in Israel to launch their products with Hyundai’s vehicle product line. Vice-versa, the initiative is expected to aid Hyundai Motors establish itself as a leader in automotive robotics market, having experimented with next generation of automotive technologies equipped with artificial intelligence and robotics. The alliance signifies a paradigm shift toward the fourth industrial revolution and new vehicle technology, thereby pushing automotive robotics industry trends.

Get a Sample Copy of this Report@ https://www.gminsights.com/request-sample/detail/210

Robotics has established itself as a principal technology across major end-use domains in the developed geographies such as UK, Germany, and Italy. The surging requirement to achieve time consistency and a higher level of production has led to escalating demand for robotic body assemblies in the country. The deployment of these assemblies to improve the proficiency of the supply chain activities across the automotive sector is likely to impel UK automotive robotics industry expansion.

Germany has a powerful base of automakers, on the grounds of which it has been forecast that robotic applications would be deployed heavily across the automotive sector in the region. Subject to the extensive implementation of robotics, Germany automotive robotics industry is likely to gain a strong ground in the ensuing years. The expansion of this business space across Germany, UK, and Italy is certain to boost Europe automotive robotics market, which contributed nearly 25% toward the overall industry share in 2016.

As per estimates, the demand for robots from vehicle component suppliers increased by 53% in 2016, and that from automotive original equipment manufacturers rose by 32% in the same year. This goes to prove that automotive robotics industry has bright prospects across North America. In fact, research reports claim that North America automotive robotics market is expected to witness a lucrative growth over the coming years, having held a valuation of USD 1 billion in 2016.

A currently compiled market study claims that automotive robotics industry revenue is anticipated to surpass USD 5.96 billion by 2024. Considering the notable contributions made by the automotive giants such as Rockwell Automation, Omron Corporation, The Yaskawa Electric Corporation, and ABB Group, it is no longer a supposition that automotive robotics market will indeed experience a commendable expansion in the years ahead.