Panacol, the Germany based company constituting the competitive spectrum of UV adhesives market has officially announced the launch of Vitralit UV 4802, specifically designed for bonding intense temperature resistant thermoplastics. This next generation acrylate resin based light curing adhesives, reportedly showcases excellent adhesion properties to many plastics including TPU, PEN, and PEEK. The product is deemed to garner mass popularity across UV adhesives market, especially amidst the backdrop when conventional adhesives find it hard to adhere to these non-compatible materials. Panacol’s Vitralit UV 4802 is also highly heat resistant. If reports are to be relied, it remained flexible and soft even after prolonged exposure to temperature as high as 150°C. Experts have been already raving about the technology, claiming that its flexibility and high temperature resistance, may allow it to bring a disruption in the overall business space. 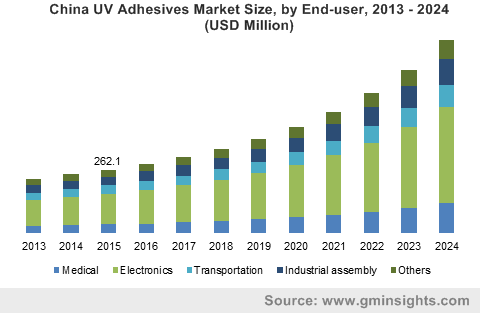 The medical sector, unquestionably, is one of the most opportunistic application arenas of UV adhesives market. These products form lasting bonds in syringes, filters, hypodermic needles, intravenous tube and catheters. In this regard, it is important to mention that when it comes to medical device manufacturing adhesives, the choice of curing method is the most important factor that makes the difference. As disposable medical products are mostly produced in bulk, mechanical bond strength and rapid curing of adhesives are two major verticals that manufacturers highly bet on. The extensive penetration of UV adhesives industry can be majorly credited to this fundamental aspect, given the fact that this kind of adhesives almost cure instantaneously. Flexibility, variable viscosities, strength, and good gap-filling capability are some of the add on benefits that boost its commercialization potential.

Get a Sample Copy of this Report @ https://www.gminsights.com/request-sample/detail/1201

Regionally, US exhibits a strong potential with regard to the growth of this fraternity. The reason behind the region becoming the hotspot for UV adhesives market investment is quite obvious-the expanding medical device sector in the region. The United States is rather claimed to hold the largest medical device market share in the world with a global valuation of almost USD 150 billion in 2017. The phenomenally growing medical device industry aptly justifies the growth potential of the regional UV adhesives market, given the product’s extensive deployment in this domain due to low VOC emission.  In fact, as per estimates, U.S. procured almost 75% of the overall North America UV adhesives industry in 2016.

A strict regulatory reference speaks volume and has much to contribute in the regional UV adhesives market share. Say for instance, the U.S. EPA along with few of the other renowned regulators have rigorously promoted adoption of UV technology, on ground of its environmental viability. In fact, with the standardization of norms like USP Class VI standards and ISO 10993 that deals with testing and evaluation of medical devices, UV adhesives industry would not just contribute toward the regional space but also at a global scale. This is amply validated by the presumption which claims global UV adhesives market to enter the billion-dollar business space by 2024.

Despite these growth opportunities, UV adhesives market is characterized by a chain of constraints, pricing pressure being at the pinnacle. High manufacturing is prompting end-use sectors to look out for some cost effect alternatives, which by consequence is deterring the business proliferation. In addition, a vivid comprehensive requirement of proper curing system having low depth of nearly 0.5 inch is further narrowing the product adoption across some of the sectors, further shrinking the profit margin. Nonetheless, UV adhesives market giants have been taking extensive efforts to bring technological advancements in the product design which over the ensuing years would carve a lucrative roadmap for this busines. In terms of profitability quotient, overall business space is likely to chart a double digit CAGR of 12% over 2017-2024.