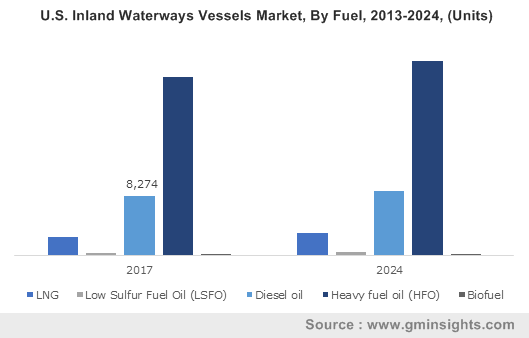 A recent instance validating the authenticity of the aforementioned statement is the Jal Marg Vikas Project undertaken by the Indian government that may be a potential game changer for transportation through the Ganges. The $809 million project is being designed to be economically and environmentally potent and may effectively enhance trade and commerce through the Gangetic route. The rejuvenation of the Ganges may emerge as one of many driving forces inevitably stimulating the regional inland waterways vessels market share.

It is rather overt that the development and maintenance of internal water inlets are imperative for the growth of inland waterways vessels industry. The St Lawrence Seaway in Canada is an example of a successful waterway which has added a commendable boost to the regional inland waterways vessels market for the last 60 years and has proved to be quite a competitive means of moving cargo like iron ore, coal, stone, cement and salt. Indeed, St. Lawrence Seaway seems to have trumped surveys when it comes to competitive options for tonnage movement, as reported by logistic professionals who study movement routes to be adopted for the most profitable means of transportation. Thus, more vessels came to be deployed to operate on this route – close to 2,270 vessels alone had been used in 2017.

Get a Sample Copy of this Report @ https://www.gminsights.com/request-sample/detail/2498

Similar to non-passenger vessels, passenger inland waterways vessels market has also gained commendable traction on account of the increasing popularity of river cruises, ferries and yachts. With the expanding tourism industry, river cruises have witnessed a great surge in demand over the last couple of decades. In Europe in fact, river cruises on rivers such as Danube, Main and Rhine have been conducted with great success with luxury long boats like the Viking River Cruise. The adoption of similar boats has been rapidly occurring in the U.S. where tourism interest in rivers like Mississippi and Ohio, has added a significant boost to the regional inland waterways vessels industry. It is thereby rather undeniable that the rise in water-based tourism will augment passenger inland waterways vessels market size, slated to register a CAGR of 3% over 2017-2024.

Regulatory authorities have been trying to promote inland waterways transport on a large scale, as using waterways to transport cargo has certain environmental advantages such as reduction of pressure on highways and railways, lower noise pollution, less land-based congestion and reduced emission. Additionally, water-based transportation also has minimal effect on human livelihood and ecological diversity.

Since most of the inland waterways vessels naturally use diesel as fuel, diesel oil has been forecast to account for 90% of inland waterways vessels market share by 2024. However, since diesel is not quite the most ecofriendly fuel, companies have been developing vessels that would be run by electricity and will be virtually free of any kind of emission. In fact, such barges have already been designed and are being released to operate from Amsterdam, Rotterdam and Antwerp, for moving goods in the inland waterways of Netherlands and Belgium. In 2018 alone, five such barges, which can accommodate up to twenty-four 20 ft containers, are being released and if they succeed in their operation, they will be potentially taking 23,000 trucks off the roads.

The rising preference for energy efficient and technologically advanced solutions for the transportation of goods is certain to add stimulus to inland waterways vessels market. Another factor augmenting the commercialization scale of this vertical is the expanding tourism industry that is becoming more and more ecologically tolerant by the day. With a base valuation of $1,500 billion in 2016, inland waterways vessels market size is projected to be pegged at $2,250 billion by 2024 driven by a plethora of trading activities, favorable government support, and the growing demand for congestion-free transportation.