The rising environmental concerns and subsequent implementation of low-carbon economy policies are expected to drive Europe electric radiators market expansion over the coming years, with consumers and governments looking to adopt more clean energy products. Development of green building technologies is helping countries move faster towards a zero-emission future, as traditional heating and cooling equipment are being replaced by modern alternatives. Appliances powered solely by electricity are becoming more affordable and are less complex to set up, influencing demand for the electric radiators industry in Europe. In addition, the colder weather conditions experienced by most European countries has made efficient heating equipment a must-have across households, commercial establishments and industries in the region. 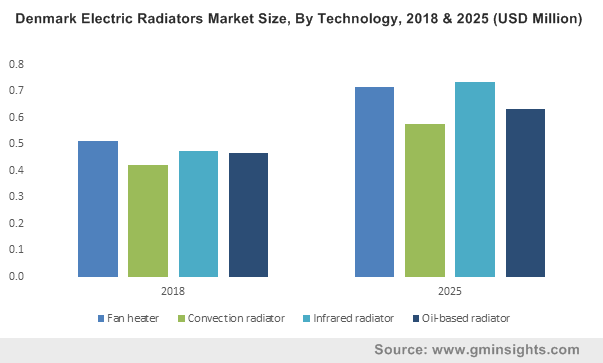 Technically, though gas is considered to be cheaper than electricity, there are significant long-term advantages of using an electric radiator. Where a gas-powered heating system can lose a notable amount of energy while operating, their electric counterparts are known to transform 100% of electricity utilized into heat. Often portable and requiring only a plug to operate, these machines allow controlling individual room temperatures instead of having a central system that heats the entire house or building. Lack of any pipework needed for operations makes electric radiators easier to install than boiler systems, demonstrating another key benefit which will undoubtedly lead to considerable growth prospects for the Europe electric radiators market.

In the European Union, reportedly 75% of heating and cooling applications are powered by fossil fuels, coercing nations to develop stringent policies for meeting future climate goals. The electric radiators industry could assist residential and office spaces in shifting away from conventional fuels and use emerging sources of energy like renewables. Countries like Sweden, Finland and Denmark have shown prominence in building wind, solar and tidal power plants, along with other EU nations where green energy initiatives are gathering pace. Rapid advancements in renewable energy projects will ultimately result in lower energy costs, further advocating the significance of the Europe electric radiators industry.

In 2017, nearly 17.5% of the total energy production in the EU was from renewable sources, as compared to 8.5% in 2004. The Europe electric radiators market is poised to witness accelerated consumption owing to increased supply of wind and solar energy to power grids, many of which are connected to existing buildings and businesses. Supposedly, 80% of all buildings to be present in the U.K. in 2050 have already been constructed, signifying the immense need for refurbishing and renovating existing structures to enhance their energy efficiency.

Get a Sample Copy of this Report:@ https://www.gminsights.com/request-sample/detail/3220

Speaking further, an estimated 40% of the carbon footprint of U.K. can be attributed to the buildings environment, making it essential to install energy-efficient heating solutions that would contribute to the country’s low-carbon roadmap. The region is home to thousands of listed buildings that are being converted into modern establishments, offering tremendous opportunities to install electric heating options, including radiators. As evident, the electric radiators market in Europe will experience growing revenues from the upgradation of existing houses and buildings in the U.K. as well as rest of the countries in the region. Convection radiators, in particular, could observe augmented demand in Europe  due to cost, safety and efficiency benefits offered.

Seemingly, convector radiators heat the room to required temperature faster and are much easier to incorporate with a room’s interior design. They also have reduced touch temperature which lowers the risk of fire and is not harmful to children. Even though these equipment might entail a higher purchase price, they are said to consume about 10% lesser energy and they do not leave residual heat. Representing an effective space heating solution, convection radiators could potentially deliver remarkable returns for the electric radiators market in Europe, which is projected to reach remunerations of more than US$600 million by 2025.