What are some of the essential driving forces for TIC services market outlook?

Growing emphasis on consumer satisfaction and safety has proliferated testing, inspection, and certification (TIC) services market size as governments worldwide have implemented stringent quality regulations on almost every industry vertical. Whether it is construction, automobile, energy, healthcare or other segments, continuous advancement in products and components have necessitated upgraded testing and certification requirements.

What are the factors that will drive TIC services market trends over the forecast period?

Improvements in management, product quality, manufacturing processes, supply chains and service value have become imperative for the growth of any business, imposing the need for TIC services, which would eventually augment the industry outlook. Existence of recognized certifications such as ISO:9001 or ISO/TS 16949 make it easier for customers to search for companies that provide excellent product quality, better customer service and new, innovative solutions.

The global TIC services market share is anticipated to exceed USD 260 billion by 2025, driven by the obligation of companies towards meeting specific product requirements and to comply with international quality standards.

Besides helping to control the quality, effective testing and inspection processes aid in minimizing rejections, reduce manufacturing costs and identify reasons for a defective output. The transportation segment, in general, constitutes a major part of the global manufacturing industry where thousands of components or auto parts go through daily quality checks.

Get a Sample Copy of this Report:@ https://www.gminsights.com/request-sample/detail/2318

As governments and international agencies are constantly raising the weight, material and other standards of automobile components to enhance the safety and efficiency of vehicles, the TIC services industry is subsequently gaining massive popularity. OEMs as well as small auto component vendors are striving to achieve high level of quality and get certified, to get documented and provide validity to their proficiencies and expertise.

Frequent inspection and evaluation of manufacturing processes by in-house or third party services to maintain a grip on the quality level will continually boost the TIC services market.

The TIC services market is rapidly witnessing demand from the healthcare and life sciences segment, with test and inspection reports of pharmaceutical equipment being critical in assessing whether the international standards are met. TIC companies are trying their best to evolve with technological developments and remain up-to-date with new regulations pertaining to safety and quality.

Products, apparatus and supply chains are subject to quality testing activities regularly, as pharmaceutical companies are responsible for providing vital therapeutic solutions. Even other parties involved in the supply chain must go through intense inspection by assigned representatives to be eligible to acquire critical certifications. 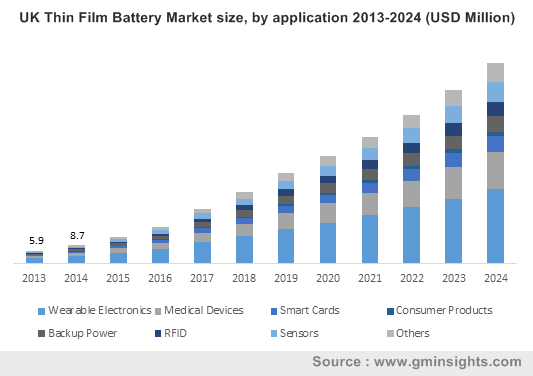 Molded Interconnect Devices (MID) market is poised to witness an accelerated growth over the ensuing years, amidst the backdrop of the frequent technological advancements in telecommunication sector. The ability of the device to facilitate miniaturization has largely added to the expansion of its application portfolio in a range of consumer products. 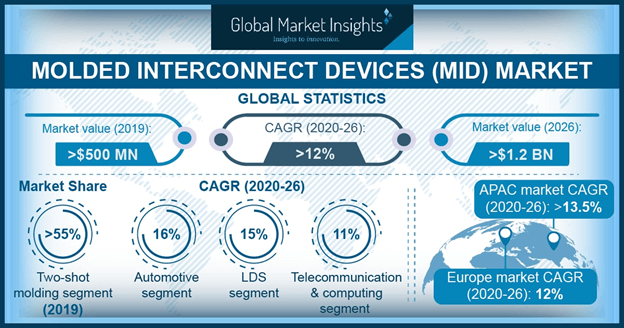 MIDs have gradually become the prime circuitry solution choice in the automotive and electronics industry, owing to its easy assembling, smaller circuitry. and light weight when compared to conventional PCB circuits. It is prudent to mention that the eco-friendly tag that these devices carry is one of the major factors fueling the MID market growth worldwide. These devices reportedly incorporate thermoplastic materials that are recyclable and do not involve hazardous manufacturing processes.

The growth of MID market has been greatly boosted by economies that rely on their manufacturing industry for growth, with the Asian economy – majorly China, South Korea, Japan and Taiwan in the lead.

Below is an outline of molded interconnect devices market trends with regional frame of reference:

Touted as one of the major growth avenues in the MID market, China is estimated to contribute over $155 million to the MID industry by 2024, aided by the increasing demand for MIDs in the consumer electronics sector. China has achieved a rapid growth rate because of its ability to provide cheap labor for manufacturing industries, which has prompted many multinational companies to shift their manufacturing units in the country. The nation has now turned into a global manufacturing hub, with Apple setting one of the most prominent examples of this trend.

The technology company with an expansive product portfolio comprising portable electronic devices that are more compact and reliable is an ideal target consumer for the MID market. China also boasts of other domestic tech companies who have recently began dominating the smartphone market owing to their competitive sleek devices, the One Plus flagship line being an example of this phenomenon. Not to mention, the region being a key automotive manufacturing hub hosting the presence of many international and domestic brands also adds to its strong contendership in the global MID industry fraternity.

Get a Sample Copy of this Report:@ https://www.gminsights.com/request-sample/detail/424

Japan is another prominent nation fueling APAC molded interconnect devices market growth. The region’s thriving automobile manufacturing industry is slated to be one of the top-notch regional drivers. With circuitry designed using MID facilitating the incorporation of these cutting-edge technological features, it is overt that APAC will be one of the most lucrative hubs for the MID market expansion. As per reliable estimates, overall APAC MID market is projected to surpass a valuation of USD 400 million by 2024.

European nations have been renowned for their active participation toward ensuring environmental sustainability trends, making the continent one of the leading players in the MID market expansion. The MID Laser Direct Structuring (LDS) manufacturing process allows MID to be made via a single-shot molding process which is relatively less harsh on the environment than conventional methods.

The continent’s expanding vehicle manufacturing sector in tandem with the presence some of the world’s major automotive OEMs is expected to boost the Europe MID market share in the coming years. The rapid technological advancements with regard to automotive safety such as seatbelt safety systems and sensor positioning will further provide massive growth opportunities to the MID industry players. The regional demand is slated to record a CAGR of about 10.5% from 2018 to 2024.

Besides the consumer electronics and automotive sectors, one of the most anticipated trends in the MID market remains the contribution of healthcare fraternity to this space. With rapid R&D investments toward healthcare prototyping gaining prominence, the sector is certain to be a profitable end-user for the molded interconnected devices manufacturers. Global Market Insights, Inc. forecasts the healthcare MID industry to record an appreciable double-digit CAGR of 15% over 2018-2024.